So I wanted to get a backup situation going for my two main Linux machines (my Thinkpad and my home-built rig).  I’ve been looking at a lot of options.  I’ve settled on deja-dup (more below).  The first thing that came to mind is a system that I can install a plugin for on my FreeNAS box called “bacula.”  You can find additional information about it here.

I started putzing around with it, but it’s really a little overblown for what I need it for.  It’s pretty complicated.  And most of the instructions I found online either didn’t relate to the FreeNAS plugin (web GUI based) or were incredibly, incredibly old.  So that one is out the window.

Then I looked into something called rsync.  It’s a pretty easy command to keep files synchronized between two folders.  I was able to run a quick backup of a small folder in my home folder onto an NFS share on the FreeNAS box.  It’s good, but I would have to start putting in cron jobs to get it to happen regularly.  You can find information about it here.

Next, I looked into something called duplicity.  You can find information about it here.  It’s basically a command line utility that works hand-in-hand with rsync (if I am understanding this all correctly) to schedule backups and create profiles…whereas rsync is generally a one-time command. (Or repetitive if you use the cron daemon.)

Even that seemed to be a little overkill…I really just wanted my home folders on both machines to be backed up somewhat regularly.

But it has a simple GUI, called “deja-dup.”  And by simple, I mean really simple.  Maybe even too simple.  Here’s what it looks like: 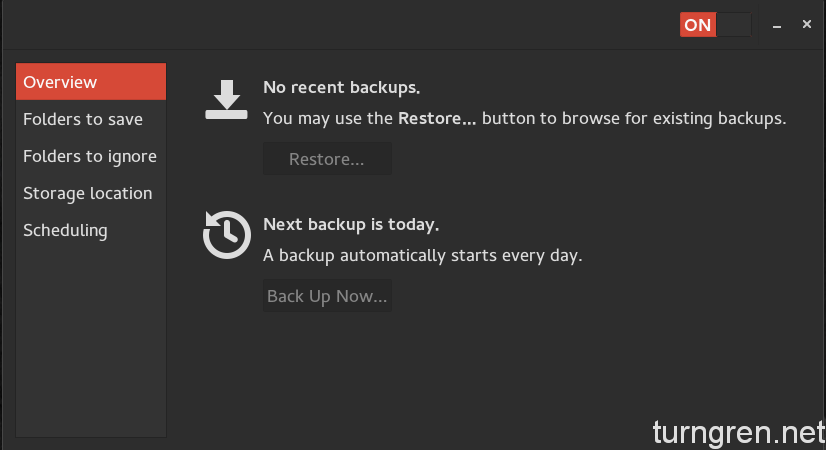 As you can see, the interface is pretty simple.  It fits in well with the Gnome desktop.  There are a few options, in terms of scheduling, etc.  And once you add the folders you want, and start to run the first backup, it pops up and asks you if you want to encrypt the backups.  I opted not to, because nothing on the FreeNAS box is outside-facing, and I didn’t think it would be a huge deal.  Also, if something happened to one of my computers and I had to restore a backup, I didn’t want to be stuck with a forgotten password and completely screwed.  So I started off backups on both the Thinkpad and my main machine.  Here’s the progress window: 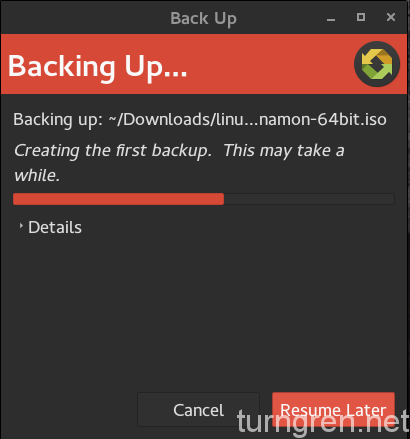 It’s pretty simple.  Sometimes, though, I wonder if I would rather just have a file-by-file match instead of a bunch of archive files…then I could browse directly on the NAS…but then I guess I wouldn’t be able to have multiple backups and revisioning.  That’s why I ended up choosing this over rsync and a cron job.

(I also found a similar program for Windows which I have just started using to backup my girlfriend’s computer, but I’m not going to waste too much time writing about it…it’s basically the above, but for Windows.  It’s called Duplicati and you can find information about it here.  It’s also very easy to use, and you can save to remote locations, etc.)