This salisbury steak would be pretty good on its own, but in all honestly it is hard to compare to the Boston Market variety.  In short, the increased variety of food items doesn’t make up for the difference in quality. 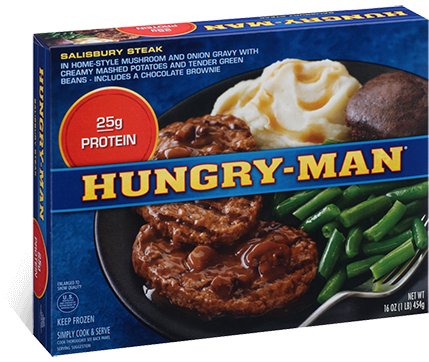 The steak is solid.  I’ve definitely had worse salisbury steak.  The texture is okay, but despite the picture on the box, I don’t remember seeing any mushrooms in mine.  The gravy is good, but again, not as good as it’s Boston Market counterpoint.

Green beans are okay, needs salt.  The mashed potatoes are pretty standard…not too great, but not bad.  The worst part of the beans and potatoes is that sometimes at packaging some of the brownie batter gets into them.

The brownie itself is really odd.  It isn’t that great, and the instructions are only odd because of the brownie.  You microwave the entire meal for a little while, then take out the brownie with a fork, and then continue to microwave the rest.

I’d eat it again, but only if the store is out of Boston Market.