SSL is fixed.  Check this out: 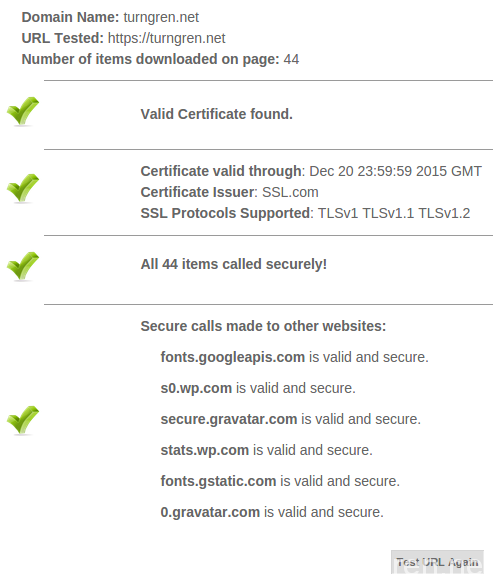 Came home from work today, took a nap, woke up late and decided I was ready to finish beating my head against a wall for this.  It took me a good hour or so to get a working virtual host using the certificates I bought in December.  Finally got that working, then changed the virtual host to match the same root directory as the site is under.  Then I ran into some real problems…problems logging on, getting kicked out of the WordPress admin panel, etc.  Turns out it was caused by three things:

Finally got all that sorted out…part of which involved resetting my password directly through mysql…that was a pain.

Then I finally started running some tests, and I was having problems like “not all of the elements at the URL are provided securely.”  Okay, so I’ll have to force SSL on anyone who visits the site.  No problem.  Added a virtual host that uses the mod_rewrite feature in apache.  Now everything has to be transmitted via SSL.  But I was still getting the errors!

This is when I started to acquaint myself with the developer tools in Chrome.  I needed to figure out exactly which elements were coming through insecurely.  Turns out it was all the pictures I had embedded.  They had a link that started with http:// so I had to go through and change all of those.  And now things seem to be normal, and I even get that awesome little green padlock at the top!  Makes me feel legit.

A few other things I changed for security reasons:

A few other things as well that I can’t remember right now.  I think I’m also going to take a look at nagios and see what it looks like.

Oh, and I added a phpBB forum – look for the link on the left.  It’s bland and empty right now…I’ll look for a good theme that will match the main site and see how it looks.

Oh, and a little bit food related news – I decided to start over on my cast iron pan.  I hit it with some oven cleaner and let it sit for a few hours, so I was down to bare iron.  Reseasoning it with flaxseed oil.  I’ve read a few articles about it being pretty much the best oil to use due to its smoke point.  I’m going to give it 6 or 8 1-hour bakes at 500 degrees to see how it works.