Here’s a few pictures, with the recipes (and notes) below: 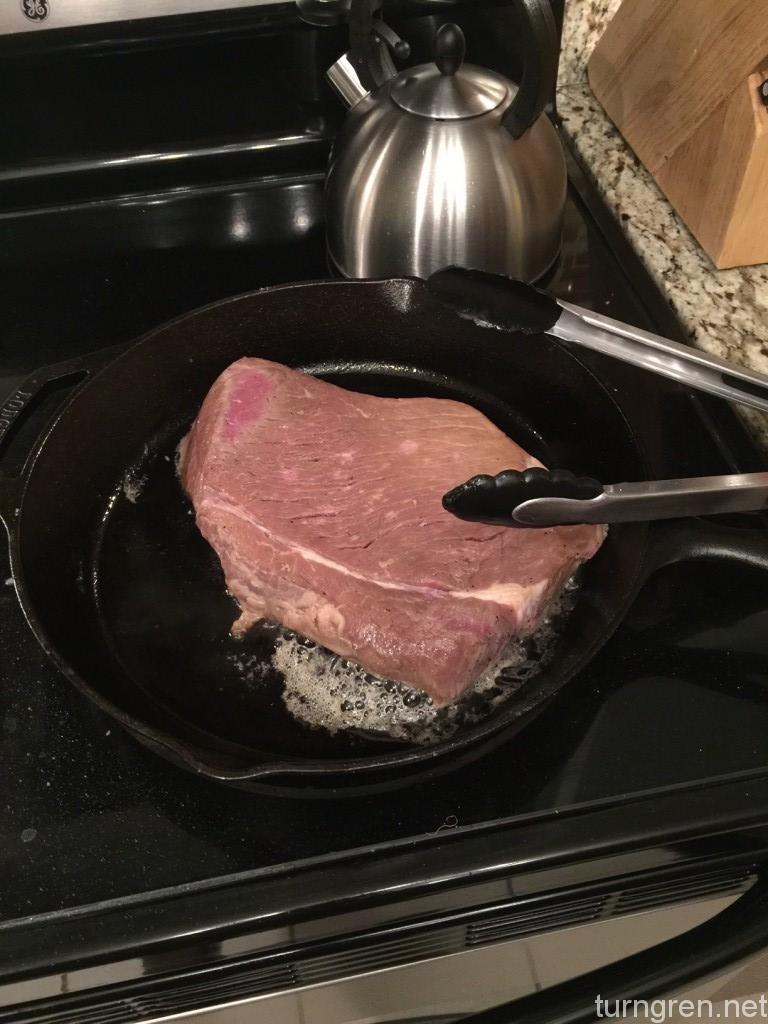 Searing the London broil prior to adding to the oven. (There is nothing wrong with the cut – that top corner just ended up not being submerged in the marinade overnight.) 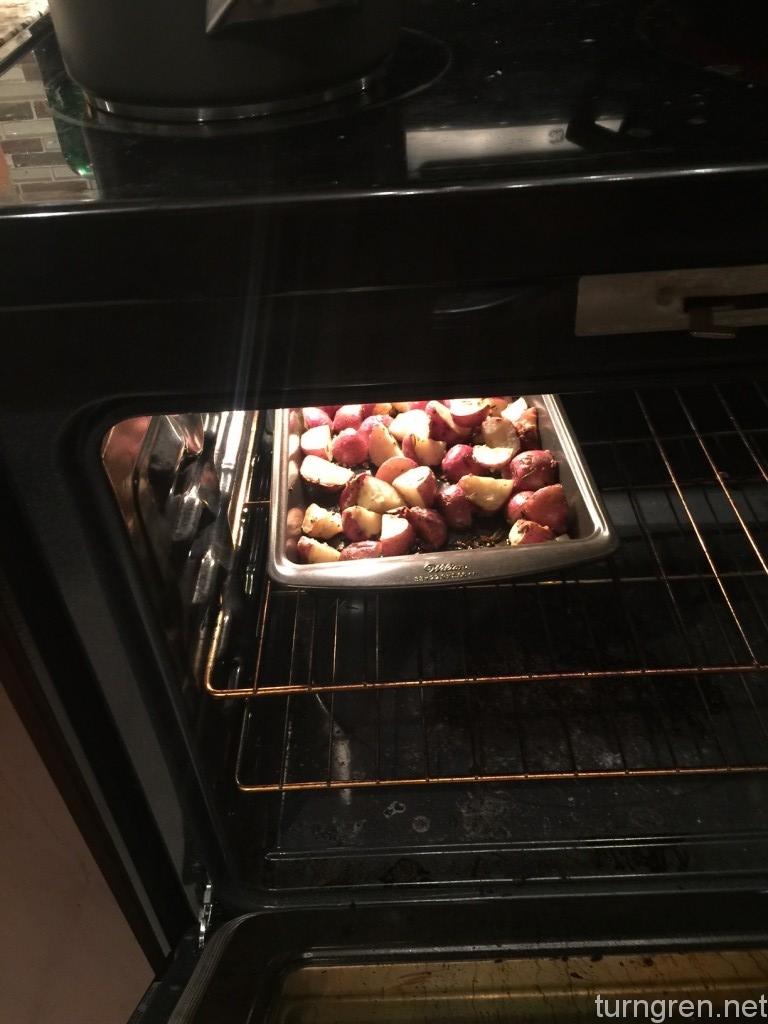 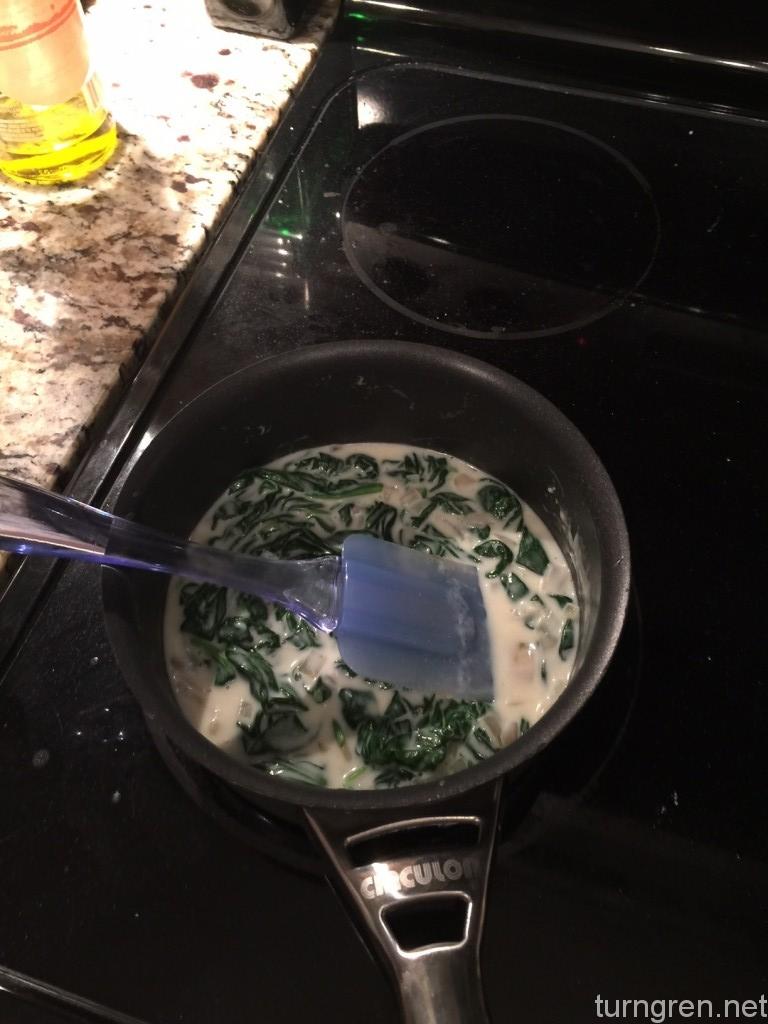 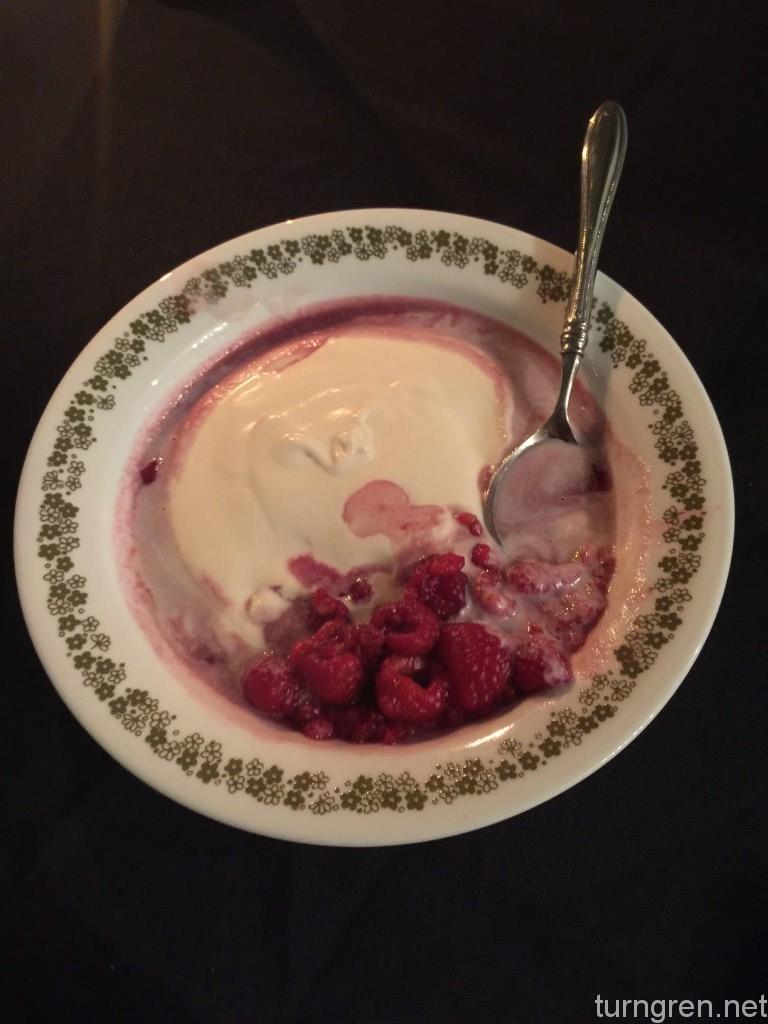 Note: I used a London broil because there were no flank steaks available.

Notes: The flavor was lacking.  If I were to do this again, I would use the leftover marinade to make a reduction to pour over the beef.  You could really taste the bourbon – and not in a good way – but none of the other flavors added.  It was a shame, because I was really looking forward to making this, and it did not meet expectations.

Place spinach in a large saucepan (3 to 4 quarts) over medium heat (it will be extremely full), and season with salt. Cover and cook, tossing occasionally, until wilted, 4 to 5 minutes. Transfer to a colander, and rinse under cold water until completely cooled; squeeze out as much liquid as possible. Set aside.

In a medium saucepan, heat butter over medium-low; add shallot, and season with salt and pepper. Cook, stirring, until soft but not browned, 3 to 5 minutes.

Notes: THIS. WAS. AMAZING.  My first time I think even tasting a shallot, much less cooking with one…and it came together fantastically.  I will be making this again, and soon.  However, as I mentioned earlier, I cut down on the amount of spinach, and regretted it.  It is important to note that it looks like a great deal more than it really is in a raw bunch.  It will cook down more than one thinks.

Preheat the oven to 400 degrees F.

Cut the potatoes in half or quarters and place in a bowl with the olive oil, salt, pepper, garlic and rosemary; toss until the potatoes are well coated. Dump the potatoes on a baking sheet and spread out into 1 layer; roast in the oven for at least 1 hour, or until browned and crisp. Flip twice with a spatula during cooking to ensure even browning.

Notes: Simple and good.  Do this.

In a small bowl, combine the mascarpone with the honey. Remove the strip of orange zest from the cherries. Serve the warm cherries and syrup in bowls or stemmed glasses, topped with a large dollop of the mascarpone cream.

Notes: But earlier you said raspberries!  That’s right.  I couldn’t find cherries.  The raspberries worked just as well and had a great flavor, but I am not a fan of the seeds…would like to try this again, and with cherries.

Also, I was unable to get mascarpone – so I did some googling and found a little trick.  If you cannot find mascarpone cheese:  Add equal parts heavy cream and ricotta to a blender.  Blend until thickened. BAM!  It’s pretty much mascarpone.  If you had them side by side you could probably tell a difference, but for this recipe it worked out just the same.  Hell, if it bothers you, call the recipe “Cherries, ricotta and cream” instead.